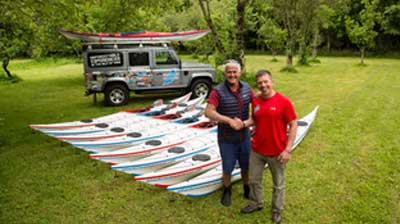 Nigel Dennis, world renowned sea kayaking leader and coach personally delivered the fleet of hand-built junior sea kayaks to the Isle of Man this week, just in time for 'Learn 2 Explore' sessions starting next weekend. Nigel is the owner of Sea Kayaking UK (the North Wales company), where the kayaks are built to order, and sister company Celtic Paddles, which supplied bespoke carbon junior paddles as part of the order.

Nigel took a few days to paddle some of the Island's spectacular coastline, as in his words "he's never really explored the Isle of Man". His support of Adventurous Experiences and the annual Isle of Man Sea Kayak Festival each September means he's normally coaching throughout his time here.

Participants on the award-winning Junior Paddlesport program are keen to be getting on the sea shortly, having trained hard indoors throughout the winter. From October to March the program runs from at Western Swimming Pool, then transfers outdoors during the summer! For more information or juniors wishing to join the next intake, starting 28th September, visit the website:
www.adventurousexperiences.com